When an application puts a socket into LISTEN state using the listen syscall, it needs to specify a backlog for that socket. The backlog is usually described as the limit for the queue of incoming connections. 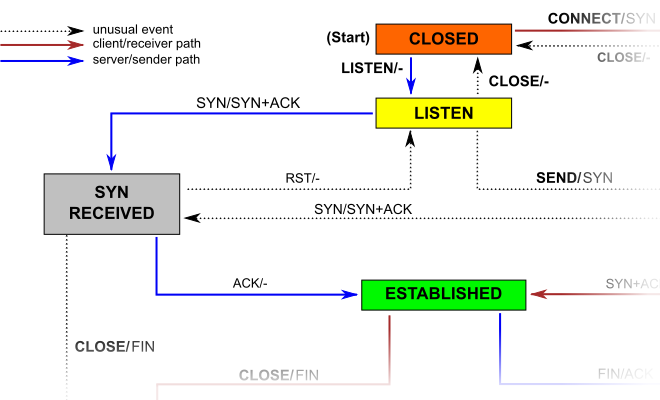 Because of the 3-way handshake used by TCP, an incoming connection goes through an intermediate state SYN RECEIVED before it reaches the ESTABLISHED state and can be returned by the accept syscall to the application (see the part of the TCP state diagram reproduced above). This means that a TCP/IP stack has two options to implement the backlog queue for a socket in LISTEN state:

Historically, BSD derived TCP implementations use the first approach. That choice implies that when the maximum backlog is reached, the system will no longer send back SYN/ACK packets in response to SYN packets. Usually the TCP implementation will simply drop the SYN packet (instead of responding with a RST packet) so that the client will retry. This is what is described in section 14.5, listen Backlog Queue in W. Richard Stevens’ classic textbook TCP/IP Illustrated, Volume 3.

Note that Stevens actually explains that the BSD implementation does use two separate queues, but they behave as a single queue with a fixed maximum size determined by (but not necessary exactly equal to) the backlog argument, i.e. BSD logically behaves as described in option 1:

On Linux, things are different, as mentioned in the man page of the listen syscall:

The behavior of the backlog argument on TCP sockets changed with Linux 2.2. Now it specifies the queue length forcompletely established sockets waiting to be accepted, instead of the number of incomplete connection requests. The maximum length of the queue for incomplete sockets can be set using /proc/sys/net/ipv4/tcp_max_syn_backlog.

The interesting question is now how such an implementation behaves if the accept queue is full and a connection needs to be moved from the SYN queue to the accept queue, i.e. when the ACK packet of the 3-way handshake is received. This case is handled by the tcp_check_req function in net/ipv4/tcp_minisocks.c. The relevant code reads:

For IPv4, the first line of code will actually call tcp_v4_syn_recv_sock in net/ipv4/tcp_ipv4.c, which contains the following code:

We see here the check for the accept queue. The code after the exit_overflow label will perform some cleanup, update the ListenOverflows and ListenDrops statistics in /proc/net/netstat and then return NULL. This will trigger the execution of the listen_overflow code in tcp_check_req:

This means that unless /proc/sys/net/ipv4/tcp_abort_on_overflow is set to 1 (in which case the code right after the code shown above will send a RST packet), the implementation basically does… nothing!

To summarize, if the TCP implementation in Linux receives the ACK packet of the 3-way handshake and the accept queue is full, it will basically ignore that packet. At first, this sounds strange, but remember that there is a timer associated with the SYN RECEIVED state: if the ACK packet is not received (or if it is ignored, as in the case considered here), then the TCP implementation will resend the SYN/ACK packet (with a certain number of retries specified by/proc/sys/net/ipv4/tcp_synack_retries and using an exponential backoff algorithm).

This can be seen in the following packet trace for a client attempting to connect (and send data) to a socket that has reached its maximum backlog:

Since the TCP implementation on the client side gets multiple SYN/ACK packets, it will assume that the ACK packet was lost and resend it (see the lines with TCP Dup ACK in the above trace). If the application on the server side reduces the backlog (i.e. consumes an entry from the accept queue) before the maximum number of SYN/ACK retries has been reached, then the TCP implementation will eventually process one of the duplicate ACKs, transition the state of the connection from SYN RECEIVED to ESTABLISHED and add it to the accept queue. Otherwise, the client will eventually get a RST packet (as in the sample shown above).

The packet trace also shows another interesting aspect of this behavior. From the point of view of the client, the connection will be in state ESTABLISHED after reception of the first SYN/ACK. If it sends data (without waiting for data from the server first), then that data will be retransmitted as well. Fortunately TCP slow-start should limit the number of segments sent during this phase.

There is one other aspect that we didn’t discuss yet. The quote from the listen man page suggests that every SYN packet would result in the addition of a connection to the SYN queue (unless that queue is full). That is not exactly how things work. The reason is the following code in the tcp_v4_conn_request function (which does the processing of SYN packets) innet/ipv4/tcp_ipv4.c:

What this means is that if the accept queue is full, then the kernel will impose a limit on the rate at which SYN packets are accepted. If too many SYN packets are received, some of them will be dropped. In this case, it is up to the client to retry sending the SYN packet and we end up with the same behavior as in BSD derived implementations.

To conclude, let’s try to see why the design choice made by Linux would be superior to the traditional BSD implementation. Stevens makes the following interesting point:

The backlog can be reached if the completed connection queue fills (i.e., the server process or the server host is so busy that the process cannot call accept fast enough to take the completed entries off the queue) or if the incomplete connection queue fills. The latter is the problem that HTTP servers face, when the round-trip time between the client and server is long, compared to the arrival rate of new connection requests, because a new SYN occupies an entry on this queue for one round-trip time. […]

The solution suggested by Stevens is simply to increase the backlog. The problem with this is that it assumes that an application is expected to tune the backlog not only taking into account how it intents to process newly established incoming connections, but also in function of traffic characteristics such as the round-trip time. The implementation in Linux effectively separates these two concerns: the application is only responsible for tuning the backlog such that it can call accept fast enough to avoid filling the accept queue); a system administrator can then tune /proc/sys/net/ipv4/tcp_max_syn_backlogbased on traffic characteristics.